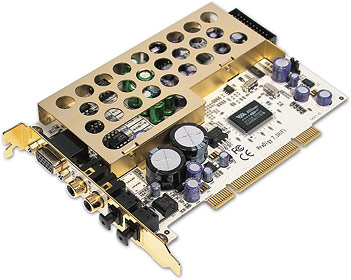 To provide stable high level output signals, Prodigy 7.1 HiFi uses a fine selection of high quality capacitors from Sanyo (SP series) and from Nichicon (up to 2200uF RU series / Nichicon ES series) to optimize the power supply of the analog and digital components on the card and to optimize the audio output quality. The special design of Prodigy 7.1 HiFi with its 4 layer PCB cuts off electromagnetic waves from the internals of the PC - there won't be problems with an unstable power supply caused by the systems CPU or the HDD.

A separation between the analog and the digital part using an aluminium cover that shields the sound against electromagnetic waves is a major part of the Prodigy 7.1 HiFi design. Even better, the OpAmps on the card are installed on sockets, providing the possibility to change them to the users preference.

The Prodigy 7.1 HiFi driver software is based on our EWDM standard providing perfect compatibility with Windows 2000 / XP / 2003 and even Windows XP x64 as well as Windows Vista 32-bit and 64-bit and Windows 7/8 32-bit and 64-bit, offering high performance and low latency operation with all important famous audio applications. The DirectWIRE 3.0 support in the driver allows you to virtually patch all your digital audio sources internally between various different software applications running at the same time and use effect plugins simultaneously. Audio streams can be transferred between different audio applications, which is especially great when using software effects, synthesizers or virtual instruments.