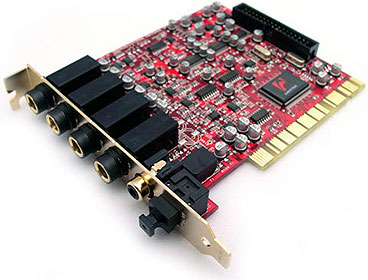 MAYA44 MKII is a total solution for today's high-resolution multi-track hard disk recording and playback. You would be amazed by its powerful and rich features MAYA44 MKII offers. MAYA44 MKII will satisfy beginners who just entering the world of digital audio, DJs using the PC audio systems, and music production professionals who produce music at his/her professional level with its power usage and reasonable budget.

As an evolution of the computer system continuously growing, a digital audio system now is much common in use. With MAYA44 MKII, you can make a complete set-up of a desktop music production system on your station very easily. MAYA44 MKII would be the center of your desktop music production system providing high quality of sound that can be compared to that of a professional studio, and a good guide to the world of digital pro audio music and multimedia market.

MAYA44 MKII has since been replaced by the new ESI version of MAYA44.